skip to main | skip to sidebar

By the one and only travel bug. That's right, I'm a traveler. And I like it. A lot!! This all began when I started hanging around with Nate. He took me to Las Vegas, Southern California, Denver, and then moved me to Washington DC where I saw nearly all of the north eastern United States! And now, again because of Nate, you may call me a world traveler. For Christmas, Nate surprised me with airplane tickets to Paris, France! 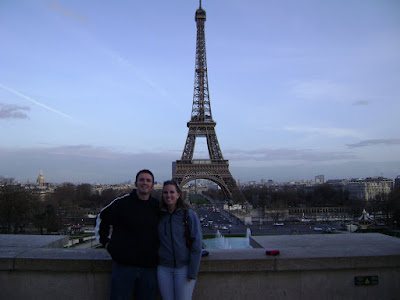 Nate's best friend and his wife having been living in Paris for the last year and a half and will be coming home to the states later this summer. So Nate decided if there were ever a time to go to Paris, France it would be when we had a tour guide and free place to stay! Chris and Brittany were gracious enough to put us up in Hotel Gamble(their apartment). We had so much fun staying with them, playing games all night long and getting a taste of their French lifestyle. I sometimes still feel like it was all a dream! Since we have about a gazillion pictures, I picked some of our faves and just put it into a slideshow. They are all mixed up and out of order, but I have too many to go through and make them neat and orderly. We hope you enjoy our whirlwind tour of our 8 day trip; if you'd like more pictures and more stories, I am more than willing to share everything! You just let me know where and when. 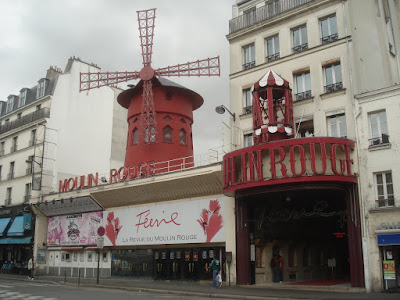 I thought it might be a good idea to give you all a breakdown of our trip before you get rushed through crazy chaos of pics. Then maybe you'll have a better idea of what's going on. (Feel free to scroll through to the pic slideshow at the end. I'll only be offended a little.)

Day 1: Arrive in Paris after 10 and 1/2 hour flight. (thank goodness it was direct). Go to the street market in front of Chris and Brittany's apartment. See the eiffel tower! Go the store and buy groceries. Take nap. Eat delicious Ratatouille for dinner. Head off to French National Championship Soccer Game. Have blast. See excellent firework show after game. Smell like smoke.
Day 2: Go to church (wonderful experience!!. Walk around Pompidue art museum and park. See Hotel DeVille (city hall). Take nap. Go to Notre Dame. Play with all the pigeons and pigeon people. Walk to Sant Michel (the young, artsy district of town). Wander around. First view of the Eiffel Tower up close. Go home and play games till wee hours of the morning.

Day 3: Nate and I wander on our own all day long all over the streets of Paris. Saw Invalides (where Napoleon is buried and war museum). Saw the Grand Palace and the Royal Palace (I don't really know what these are, but we saw them! and they are important!). Saw several famous churches (I won't name them all-you can get that if you take me up on my personal tour offer). Ate French fries and French McDonalds (we were a little nervous no one else would understand us or we understand them). Ate our first french crepes. Saw the National Opera House. Went shopping, bought cute Paris clothes and jewelry. Went to Trocadero (the best view of Eiffel in the city) and watched the tower light at dusk. And sparkle! It sparkles on the hour and that's my fave! Went home and played games till wee hours of the morning.

Day 4: LONDON! We saw everything there is to see in London, still had some left over time, and did it all in one day. I'm not going to name everything we did and saw, cause if you think of something in London, we did/saw it. And did it all walking! London was dreary and chilly, but our favorite thing about London was that everyone spoke our language and it was awesome! We thought it was dang funny that at every cross walk it's written on the road which way you chould look for cars (cuase those crazy britts drive on the wrong side), and we loved that our train arrived at King's Cross Station! I really liked the taxis, and Nate was in awe of all the little Hogwarts kids he saw walking around town in their robes. I had to refrain him from asking them if they were Gryffindor or Slytherin.

Day 5: The Palace of Versailles! Wow, my high school art history teacher would be so proud. This was a definite highlight for me. I feel pretty darn good about crossing off "walk the gardens at Versailles" off my bucket list. France is definitely an ornate country, but this palace was outright pompous! After our all day adventure, we spent the evening back in Paris exploring on our own some more. We saw the Bastille, the Pantheon, and the Opera House. We are pretty much experts at walking the streets of Paris!

Day 6: Chris didn't have school today soe he got to come with us to the Catacombs. This was so crazy to me! There are miles and miles and miles of underground tunnels all over Paris. Several hundered years ago, the cemeteries were filling up and there was no room for new bodies coming in. The priests decided to move TONS of bodies into the underground tunnels, The Catacombs. They did a precession at midnight singing creepy songs with everyone dressed in black moving the bones. There is a section of about 2 miles open to the public. You go down a very tiny sprial staircase about 60 meters down into the ground., then roam the tunnels of bones. Although very creepy, it's so very cool at the same time. After the Catacombs, we met up with Brittany and headed to the Arc de Triumph and walked the Champs Elysses. The craziest thing to me about the arc is that NO insurance covers you while driving around this circle. All the streets of Paris basically branch out from this point, and it is madness!! The Champs Elysses is the ritzy street of Paris. Our game was who can find the most outlandish item for sale in the window. Nate found a watch for 35000 euros. it was unbelievable! At each of these stores, you have to be "rung" in, but if you don't look like you have money, they won't even answer the door. It was a really fun experience; this was what I pictued Paris as. That night, Nate and I spent the evening on a night cruise of the Siene river. It was a beautiful way to see the city, very romantic. We really enjoyed all of the audioguides offered at all of these places we went to. It's so cool to learn little things you never would've seen/known otherwise. Spent a little more time at the Eiffel Tower and carousels (ps these are all over the city!). Went home, played games until wee hours of the morning.

Day 7: There is an incredibly beautful church in the middle of the ghetto, called Sacre Couer. We woke up early on this morning to go take fun pictures on this amzing landscape without any people on it. After the photo session, we roamed the Montmarkette. It's a shop area with a plaza full of artists and gypsies. I felt like I was in a movie while we roamed here. Very European. We made our way down to the Moulin Rouge, got our pics from the outside, went home and ate French toast and took a nap. That night we took our friends out to a good ol fashioned Creperie to thank them for their kindness. Our food was divine!! It was lot of fun to dine in Paris. From here, we headed to the Louvre and did our best to see all that we could in just a few short hours. Note to anyone headed to the Louvre: it's free on Friday nights from 6-10 if you have a student card! Went home, exhausted, and played games until wee hours of the morning.

Day 8: By now, we felt pretty good that we had seen and done all that we could while in Paris. We felt every minute was well spent. We went to the market again this day, and Nate and I packed up on Souvenirs and LOTS of chocolate to bring home. We had a beautiful going away feast complete with baguettes (Nate's ultimate fave) and chocolate lava cakes. Of course, we had a long tournament of games and it the night(well morning) was ended with Nate and I staying up until about 4 am listening to the Aggies win!!! Of course, we didn't forget about our boys! We woke up very early the next morning and headed off to the airport. The flight seemed a lot longer going home, and it took me about 4 or 5 days to get back on the right schedule (8 hour difference). All in all, what an adventure!!!!!!!!!!!!! Mucho mucho Merci's to our travel buddies, Chris and Brittany. We obviously couldn't have done all of this without you, and we can't wait until you come home!

And don't forget, there's plenty more where these came from!!! So who's up for my next trip? I've got Greece, Hawaii, Brazil, on my list, just to name a few!
Posted by The Nate and Sara Project at 7:28 PM 18 comments

Posted by The Nate and Sara Project at 8:07 PM 3 comments 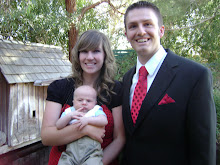 And then there were three! 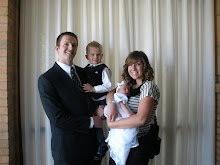 The Nate and Sara Project
We were married October 19, 2006 and are currently living happily ever after!